“High above the sand and sagebrush of southeastern California, a transmission line runs along Interstate 10, connecting solar farms in the Sonoran Desert to Los Angeles. From daybreak to nightfall, that line crackles with electricity as photovoltaic panels soak up the sun. It goes quiet just as millions of people turn on their lights.

When the sun sets, that line goes empty,” said Steve Lowe, president of Eagle Crest Energy Co. “We want to do something about it.”

It will utilize two pits left over from a defunct iron-ore mine dug into the side of a mountain. During the day—when solar power floods the grid—pumps will move water to the upper pit, ready for release at night. Lowe estimates it will take six years to build.” 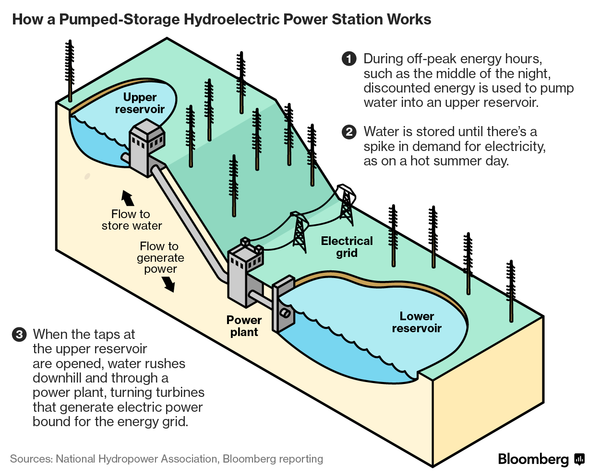 Beyond Batteries: Other Ways to Capture and Store Energy

“Eagle Crest Energy Co. plans to build a $2 billion pumped-hydropower facility at an abandoned iron mine east of Palm Springs, Calif. The plant would have a capacity of 1,300 megawatts, enough to power nearly one million homes, and would be able to generate power for about 10 hours at a time. The plant could soak up excess power overnight, when demand is slack, and during the day, when California’s solar farms are churning out electricity, and then return the juice in the evening, after the sun sets and power use rises in cities and towns. Several similar projects are awaiting government permits.”

“Newer technologies for energy storage—including batteries, flywheels, compressed air and ice—are under development, but the proven, old-school solution of storing water as a proxy for power is attracting renewed respect from utilities and environmentalists aiming to fight climate change. It helps solve a big problem as power companies invest in renewable energy, which doesn’t always produce electricity when it is most needed.

California, for example, set a record for solar-power production in early July. But peak demand for electricity comes in the early evening, long after solar production has peaked. Pumped storage gives producers a way to bank energy for future use.”

“2. Storage is becoming part of the power plant

New energy storage deployments demonstrate just how quickly we can overcome the limit that the sunset creates for solar. The trajectory of energy storage substituting for conventional generation can be traced from actual practices. Beyond the early or largest examples of non-battery energy storage recently illustrated in the New York Times, going forward, there is widespread and dramatic potential for the use of battery storage by businesses and hybrid power plants.

Battery storage added at a power plant, both conventional and renewables, can take on duties that were met by old generators. First seen in remote locations, battery storage paired with generation began in isolated grids in places like Hawaii and Chile where ancillary services from very small generator fleets were unavailable or constraining the grid operations. This helped establish the technical and commercial foundation for expansion to larger grids in the United States.

With short duration storage now understood as providing ancillary and essential services, GE is delivering hybrid plants with storage and a gas turbine integrated in a system with a single set of controls. The GE hybrid system uses the storage to provide the reliability capabilities of the gas generator with instantaneous response, regardless of whether the unit is started and burning fuel when response is needed.”

“For that reason, developers have begun to look in other places to try and find an alternative solution, and that’s when they thought about pumped water storage technology. Whether this technology will work in the old mines remains to be seen, but developers from the UK to Germany, to the US are all willing to give it a go.

In southeastern California, a transmission line runs along Interstate 10 that connects solar farms in the Sonoran Desert to the city of Los Angeles.  Every day, from daybreak to nightfall, electricity is pumped through the line as photovoltaic panels absorb energy from the sun.  The problem is that the line goes quiet as soon as millions of people turn on their lights, and that’s what experts are trying to stop.  As stated by Steve Lowe, president of Eagle Crest Energy Co. “When the sun sets, that line goes empty.  We want to do something about it.””

How water can save solar: Using bulk storage to flatten the duck

“This points to bulk storage as an ideal solution for the problem. While unlikely to be promoted by Elon Musk in a Tesla showroom, pumped hydro storage may be the most ideal technology, as it is a long tested, mature technology with widely understood costs and operating parameters. It is well suited for large, sustained discharges of energy via pumping water during low cost periods (i.e., solar overgeneration periods) and releasing the water through hydro turbines when needed.  The size and duration of the discharge is limited only by the size of the reservoirs.”